The No. 92 Porsche 911 RSR whooshed cross finish first in class, GTE-Pro, at the drop of the checkers.

Porsche also scored a “double play” of sorts:  newbie Project 1 team secured the top of the podium in GTE-Am class at the 2018 WEC Fuji 6 Hours this afternoon.  The No. 56 Project 1 Porsche 911 RSR garnered the win for both the team and for Porsche.

Sharing the No. 92 510-hp Porsche 911 RSR and qualifying last in their classification, Michael Christensen (Denmark) and Kevin Estre (France) scrambled all the way up to the top of the podium in their GTE-Pro class – with impeccable class: 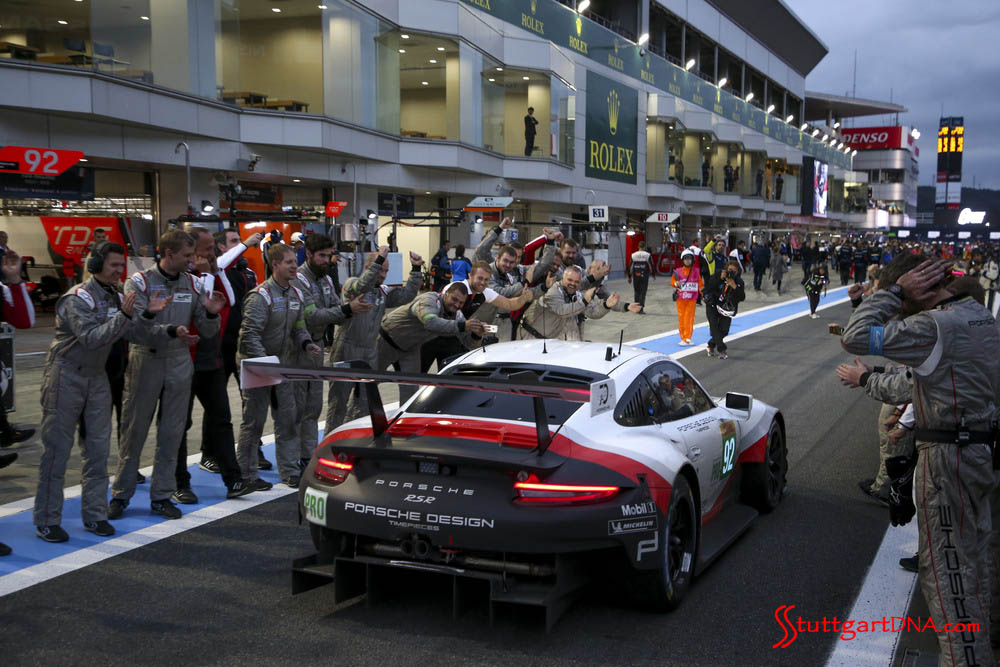 “I’m incredibly happy about our victory,” gushed Estre in the afterglow of the awesome win.  “Our set-up was simply fantastic and the good braking performance was an important aspect of our success at Fuji.

“After we changed to slicks during the safety car phase early on in the race, our car set-up allowed us to brake later than the others and thus gain positions.  Our pit stop strategy also ran perfectly.”

Christensen seconded that emotion, and further elaborated on it:  “The changing weather and track conditions were a challenge, but we mastered them very well.  We changed to slicks earlier than the others and that was very probably a key factor for our success.” 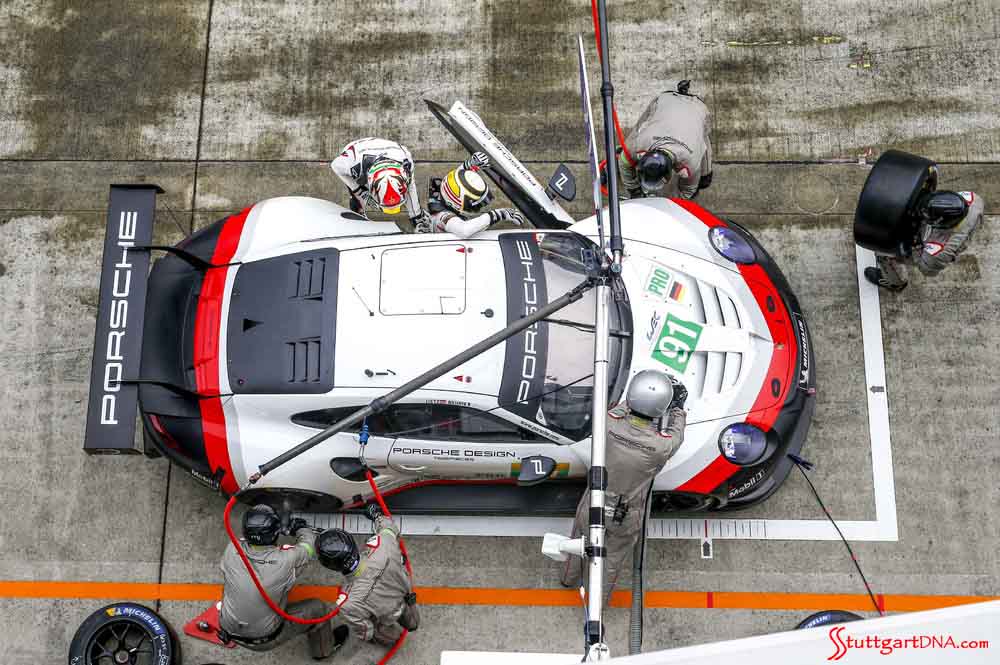 Richard Lietz (Austria) and Gianmaria Bruni (Italy) traded piloting duties in the No. 91 sister car.  By heartbreaking contrast, though, a fumbled pit stop and degrading tires in the latter laps took their toll.  The result was a dispiriting fifth-place finish.

Lietz, however, graciously put the whole weekend in philosophical perspective:  “First and foremost I’d like to congratulate the winners in the GTE-Pro and -Am categories here, and of course at the Petit Le Mans in the USA – a great weekend for Porsche, but unfortunately not for our car.

“We had several problems, which we now need to analyze and, of course, fix,” Mr. Lietz continued. “There was certainly nothing wrong with the performance of the drivers or the speed of the 911 RSR.”

No matter.  Their Fuji result also earned the No. 91 crucial championship points – points that have extended Porsche’s lead in both the manufacturers’ and drivers’ championship classifications. 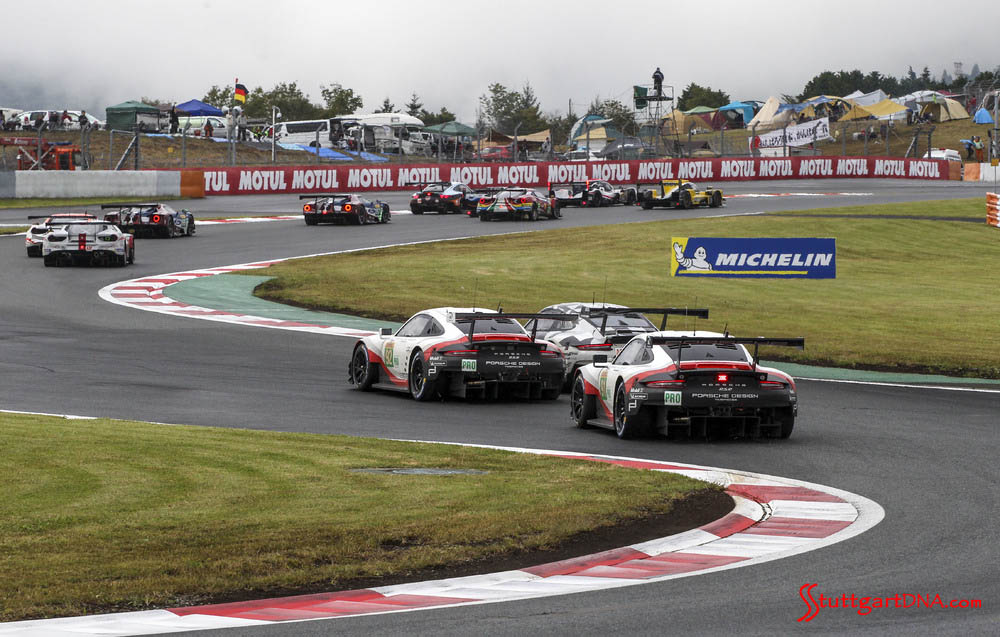 “We almost always made the right decisions during the race and the car was good and fast,” asserted Alexander Stehlig, Program Manager of Factory GT Motorsports.  The No. 92 car drove a flawless race.”

“Our No. 91 unfortunately had problems during the pit stop.  On top of that, the balance wasn’t great in the last stint.  But all in all, we’re very satisfied.”

Stehlig ought to be quite content on balance.  The Porsche GT Factory Team not only put in a strong performance in spite of circumstances, but the entire field of Porsche GTE-Am privateer teams also demonstrated even grander Porsche excellence. 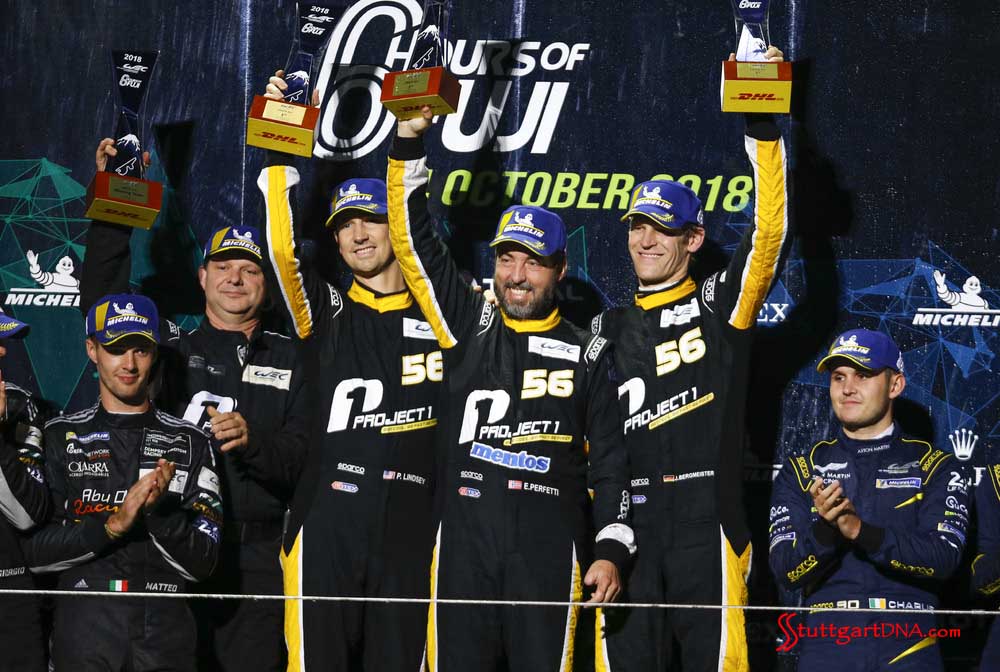 “At first the race ran like the entire weekend:  Not so satisfactorily,” Bergmeister confessed.  “We had contact, a spin and had to change the door.  But midway through the race the tide turned in our favor, and we brought home a pleasing victory.

“It’s the first WEC win for me and also for Project 1.  That’s a great step for us in terms of collecting points.  We’re all happy with this and it’s going in the right direction.” 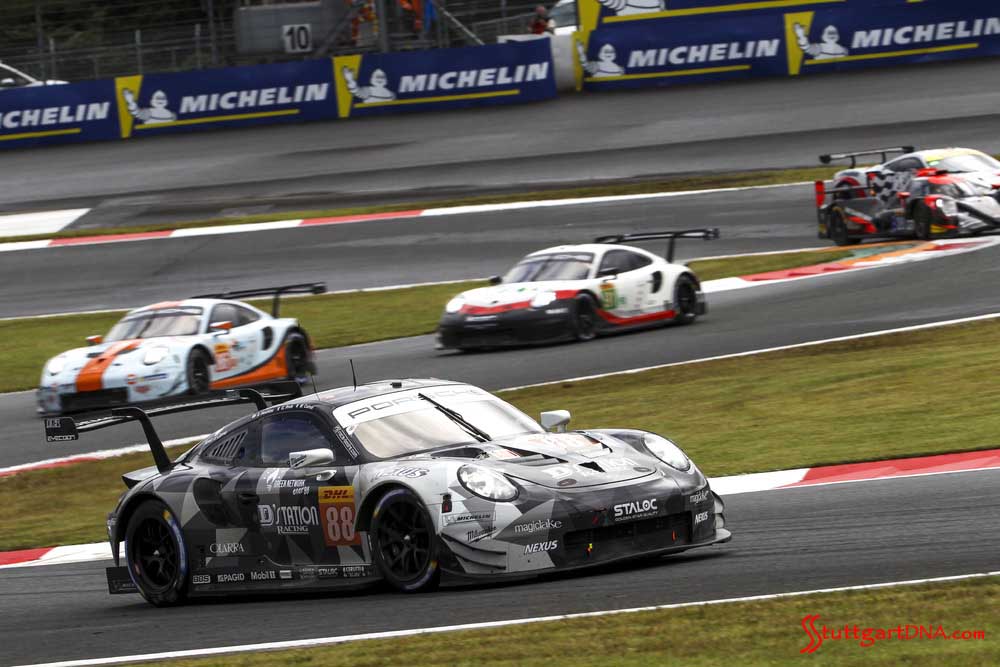 “A good result for us.  The first podium in the WEC season,” Cairoli celebrated.  “I very much enjoyed driving the 911 RSR here.  It felt really great – especially the overtaking maneuvers and duels out on the track.  I was particularly impressed by my teammate Hoshino.  This was only his second time in the RSR and he was really fast.” 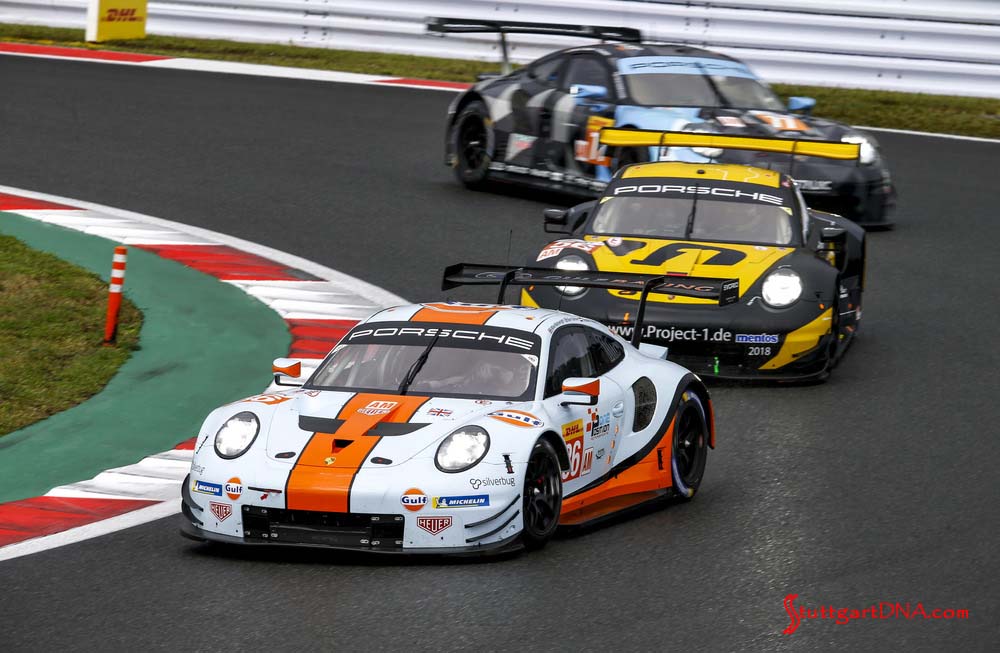 Preining summed it all up:  “That was a good first experience in the WEC.  At one point we were even leading with our team, and my teammates did a fantastic job.  At the end I drove a double stint and managed to work my way up to fifth place with our RSR.” 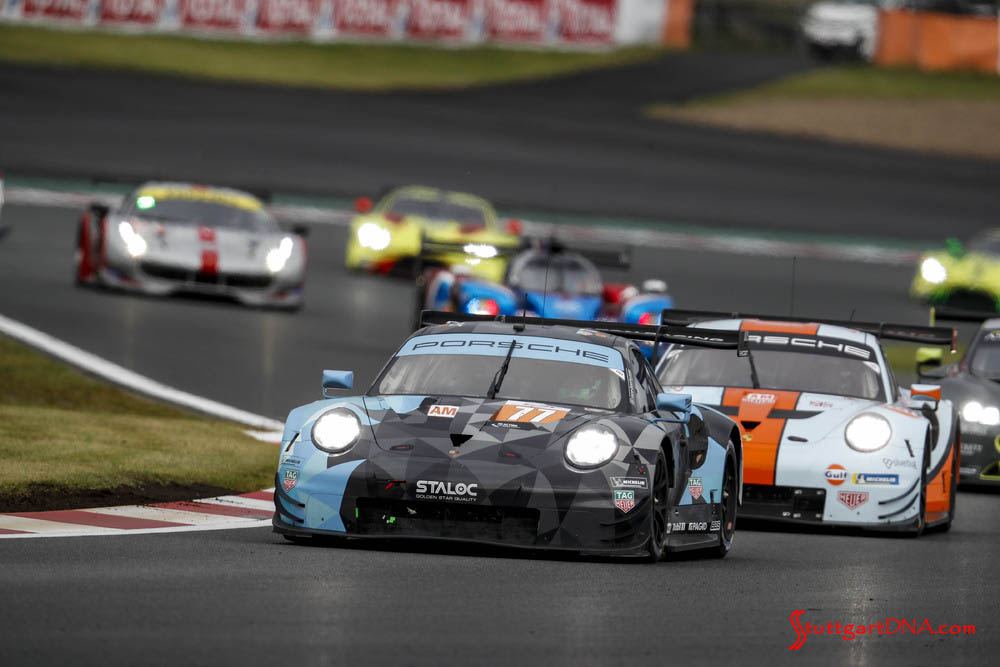 An unscheduled repairs pit stop tumbled the racecar down through the field.  Hence the 8th-place finish.

Nonetheless, the No. 77 car and team garnered critical championship points.  Therefore, they retain their lead position in the GTE-Am class championship.

“I’m a bit frustrated,” confided Campbell.  “In the middle of the race we were looking promising, we were fast and within striking distance of the leaders.  Unfortunately an electrical problem cost us 25 laps.”

Andlauer picked up the story on that critical aspect of their race:  “I could only rejoin the race 25 laps later.  The car then felt good again – the balance and the speed were excellent.

“It’s a pity because no one made a mistake; it was the technology that hampered us.  There’s nothing you can do about that.  I think we could have won, but that’s racing.”

Round five of the FIA WEC World Sports Car Championship is next up, this time in Shanghai, China, on November 16, 2018.

Please share your COMMENTS with everyone by scrolling down to the “LEAVE A REPLY” space below at the very bottom of this page.  Your input is highly valued by us and much appreciated!

All results can be found at the following site:  http://fiawec.alkamelsystems.com

This site uses Akismet to reduce spam. Learn how your comment data is processed.